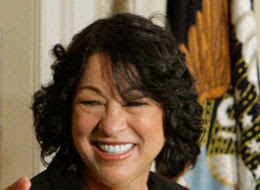 Can I call it or what?

I've been saying since 2007 that the next Supreme Court justice pick would be a Latino/a. It didn't take a rocket scientist to see that it was going to and needed to happen. It's also smart politics to start including the fastest growing ethnic group into the upper echelons of our government.

President Obama made more history today by selecting US Second District Court of Appeals Judge Sonia Sotomayor to replace retiring Supreme Court Justice David Souter. It was something that was long overdue in terms of adding more diversity to the highest court in the land and more women on a court dominated by seven white males and honorary white man Clarence Thomas.

Looking forward to seeing her in the Supreme Court photo this October once she's confirmed.
Posted by Monica Roberts at 11:37 AM