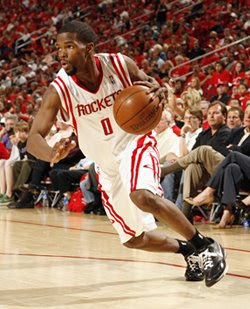 My H-town ballers are headed to LA to play Game 7 in their series versus the Lakers thanks to 26 points from Aaron Brooks and 24 from Luis Scola.

It's Clutch City 2k9 version. The question is which Los Angeles b-ball team wearing the purple and gold uniforms will show up Sunday? I'm hoping it's the LA Fakers that lost 95-80 last night and not the LA Laker one that administered the 40 point beatdown on my Rockets.

Speaking of beatdowns, let's start sorting out who deserves a verbal beatdown for being our Fool of The Week.

As usual, there were so many worthy contenders for this week's award, I chuckle to myself because I was worried when I started this feature I wouldn't have enough fools to do a weekly award.

But as our patron saint for the awards always admonishes us, fools are everywhere.

I'm also considering a Shut Up Fool! of the Month which I'll let you TransGriot readers determine it by popular vote. Let me know what you think about it in this thread.

But back to the 'bidness' at hand.

The most outstanding fool this week is another contender for the Shut up Fool! Lifetime Achievement Award in Rev. Pat Robertson.

Yeah right. The only thing he ever got right in the whole time he's been broadcasting the 666 Club (oops the 700 Club) was this gem of a comment about transgender peeps from the October 5, 1999 show.

God does not care what your external organs are. The question is whether you are living for God or not. Yes, He loves you. Yes, He forgives you and He understands what is going on in your body.

Pat Robertson, shut up fool!
Posted by Monica Roberts at 8:14 AM