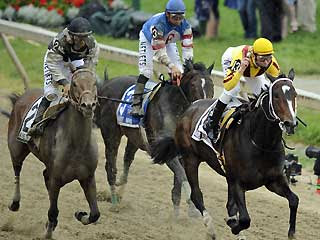 Rachel Alexandra blew out her feminine competition by 20 lengths in the May 1 Kentucky Oaks. She was obviously the class of the 3 year old fillies, and her new owner plunked down $100,000 to enter her in the Preakness Stakes to see if she could run with the big boys.

No sweat. Rachel Alexandra not only raced with the boys, she beat them.

Rachel Alexandra became the first filly to win the Preakness Stakes in 85 years as she won her sixth straight race and held off late charging Derby winner Mine That Bird to win by a length.

She comes back to Da Ville to rest and train for the June 6 Belmont Stakes and another rematch with Mine That Bird. She's bidding to become the first filly since 2007 to win the Belmont, the third leg of the Triple Crown.
Posted by Monica Roberts at 11:44 AM