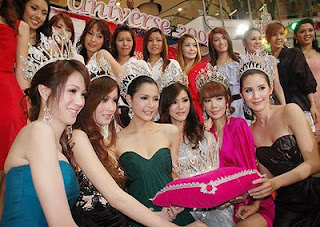 This is Miss Tiffany's Universe pageant week in Pattaya. The competition has been pared down to the 30 Thai transwomen who will compete for the crown and the chance to represent Thailand when the Miss International Queen pageant is held later this year.

The finals will be televised on May 15 at 10:30 PM local time live on Thai television.

So while you're waiting for this year's winner to be announced, here's the 2008 finals and the crowning of Miss Tiffany Universe 2008.
Posted by Monica Roberts at 12:36 AM