I received an e-mail from the National Black Justice Coalition this morning and it's a classic good news-bad news situation concerning hate crimes legislation.

As many of you may already know, Representative John Conyers (D-MI) introduced H.R. 1913, the comprehensive hate crimes legislation in the House.

According to the NBJC, the following Congressional Black Caucus members have co-sponsored it.

These are the Congressional Black Caucus members according to the NBJC who SUPPORT the bill, but have not committed to co-sponsoring H.R. 1913 yet.

The bad news is that the right-wing Forces Of Intolerance and their Uncle Tom lackey ministers in the Hi Impact Leadership Coalition are already hard at work in their opposition to the bill. They are flooding their representatives with letters and calls opposing hate crimes legislation and outright lies about the bill's effects.

If you are represented by a CBC congressmembers, if they are sponsoring it, call them to thank them for their support. If they're on the missing list please take a few moments to call your congressmembers to help drown out the voices of intolerance and ask that they consider co-sponsoring H.R. 1913.

This is our chance to secure federal protections for the LGBT community from vicious attacks and hate. But we've got to flood our legislators' inboxes and phone lines to make sure they hear our message loud and clear. There are some who are using this as litmus test to gauge how much political capital they can spend on ENDA, which will have much more determined right-wing opposition when it's introduced later this year.

Please take action now, then urge everyone you know to get in touch with their representatives. 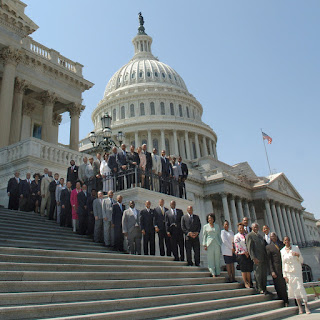 No civil rights legislation passes without the CBC being on board. The Congressional Black Caucus isn't called the 'Conscience of the Congress' for nothing. Remind the members of that proud legacy when you ask them for their support.

TransGriot Note; Received an e-mail communication from NBJC's H. Alexander Robinson about the e-mail that went out. The folks that are listed under the co-sponsors actually SUPPORT the bill, but aren't co-sponsors of it yet. Post has been corrected to reflect the new information.
Posted by Monica Roberts at 12:06 PM