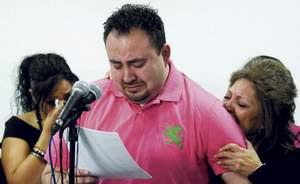 “Angie was my sister.

“She was a member of our family. We loved her very much, and we will miss her every day. Every day and every night our mom has to deal with great pain of ... one of her babies being buried. Every day our siblings and I reach for the phone and realize we’ll never hear her voice. There’s no answer anymore.

“A part of our family is missing, stolen from us. Angie was 18, her life was just beginning. She was brave, she had guts, she had courage, and she was beautiful, fun and loving. She was our little sister.

“Through the last week, we’ve watched as our sister Angie was lied about in court, angrily as the defense presented an image of my sister that wasn’t true. Their strategy of tearing down my sister to make a monster look better will not work.

“It is clear: Angie was our sister, an aunt and a daughter. Life was sometimes difficult for her, and we learned along with her to understand she was born a girl with a body that was wrong for her.

“Above all else, she was honest. It took such courage to be who she was. She was strong, there was no reason to believe my sister was anything but strong and honest with everyone.

“This week, we are deeply saddened as we witnessed graphic details about the last few minutes of my sister’s life. A big brother is supposed to protect his little sister. It breaks my heart to think there was nothing I could do.

“My sisters, Monica and Ashley, when they saw what this monster had done, they wanted to hold her, to comfort her and make her feel better. It was hard to realize nothing could have been done.

“He stole something so precious from us.

“Only a monster can look at a beautiful 18-year-old and beat her to death. This monster not only hit my sister, but continued to beat her head in over and over and over until her head was crushed in. He left her there to die.

“He’ll (never) understand how angry we are at him and how much he has hurt us. This past week and half, we’ve seen attorneys working their hardest to seek justice for my sister. ...

“We are grateful Colorado has tough laws that make it clear that attacking people because of anti-gender bias will be taken seriously. It will be prosecuted aggressively ... in Weld County.

“In memory of Angie, we call on Colorado’s leaders to pass a federal hate crime law to protect everyone.

“Justice was achieved. A message was sent loud and clear that crimes targeting LGBT will not be tolerated in Colorado ...

“Remember her as we do, as a beautiful, wonderful, precious teenager. She would want us to remember the happy times in her life. And make the world a better place.

New York, NY, April 22, 2009 – The Gay & Lesbian Alliance Against Defamation (GLAAD) today responded to the verdict in the murder case of Angie Zapata. Angie was a transgender woman who was brutally murdered in 2008. Today the Colorado jury found Allen Andrade guilty on four counts including first-degree murder and hate crime charges.

"Today's verdict was about justice for Angie Zapata, although no verdict will ever be able to heal the tragic loss experienced by Angie's family," said Neil G. Giuliano, President of the Gay & Lesbian Alliance Against Defamation (GLAAD).

"The past few months have offered Greeley residents, as well as people throughout Colorado and across the nation, an opportunity to better understand transgender lives and the horrifying reality of anti-transgender violence. Media coverage of this case has played a vital role in broadening that understanding, and it has helped more people understand the importance of a fully inclusive hate crime law like Colorado's."
Posted by Monica Roberts at 12:00 PM