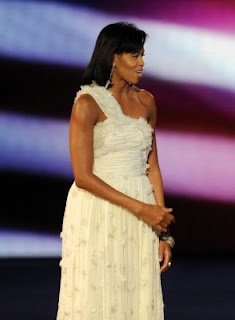 One of the things that's become a regular pattern that I'm getting sick of is the right wingers veiled (and not so veiled) racist attacks against her such as Tammy Bruce or Michelle Malkin have done and the deafening silence of the feminist movement about them.

We also see the First Lady as the subject of breathtakingly ignorant stories about her hair and curves that try to be hip but fall flat, or ones that nitpick about certain things like her penchant for sleeveless dresses and tops.

Still can't get over the fact you got blown out last November by an intelligent Black man despite all your time tested racist campaign tactics and tacking Caribou Barbie on your presidential ticket, huh?

Too bad. Go sip on more GOP Red Kool Aid and sulk in the corner for the next four years while President Obama and the Democratic congress cleans up the fiscal and societal mess y'all conservatives made. 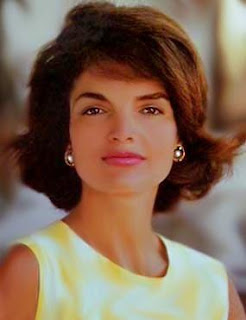 Ann Coulter made the ignorant assertion recently that Michelle Robinson Obama was trying to pattern herself after Jacqueline Kennedy Onassis, and she's wrong as usual.

The major difference is that Jackie O grew up with wealth and privilege in a divorced family traveling between palatial estates, while Michelle grew up with two working class parents on Chicago's South Side in a one bedroom apartment.

Another note to the haters. Jackie O liked sleveless wear as well.

While there are some superficial similarities between the two women in terms of their intelligence, charm, beauty, devotion to their families and wanting to do meaningful work in society, Michelle Obama is being Michelle Obama. 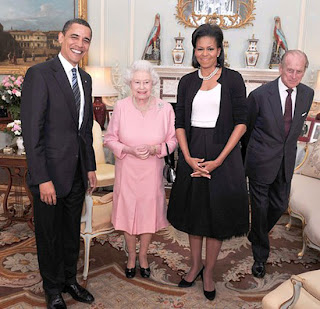 While many people try to compare her to Jacqueline Kennedy Onassis, and like Michelle I grew up in the 60-70's era in which I had until the time I graduated from high school knew and still know legions of girls named Jacqueline, Michelle is different from the women who previously served as First Lady.

In addition to the obvious being the first African-American First Lady, she just has that combination of beauty, off the charts intelligence, charm and regal presence in addition to her modelesque height that makes even Queen Elizabeth II breach royal protocol and hug her. 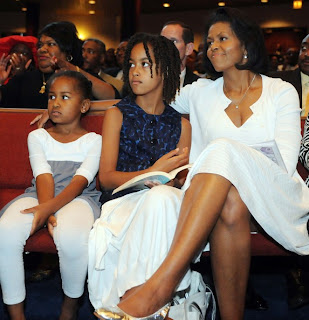 What you are being introduced to is a sistah that has flava. She's got it going on in many areas of her life. Some of you wingnuts can't stand it that once again, it is a progressive Black woman who exudes all of these qualities and then some that the entire world just loves, and the Black women you hold up as examples on the conservative side for us to admire don't. 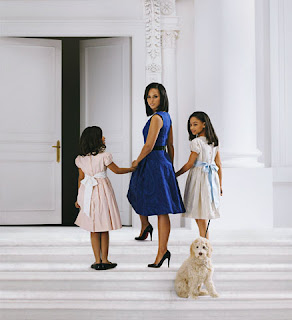 Your failure is compounded when already accomplished Black women pose for photographs emulating our First Lady or lovingly speak about the immense pride they have in someone like Michelle representing them.

So no, Michelle O ain't trying to be Jackie O. She's one of the best and brightest of our community working on being the best First Lady she can be in her own way.

Too bad you're hatin' on her so much that you refuse to understand or acknowledge it
Posted by Monica Roberts at 1:30 PM

Well said.
The First Lady is doing a lot of good, and will continue to, but she is Michelle Obama, married to Barack Obama, and that pisses conservatives off.

This is a really great post, I love it! I am personally really puzzled (not really) by the silence of feminists about Michelle Obama's treatment, past and present, in the media; then again, white feminists have always left African American feminists out in the cold, so whatevs.

I will say that one of the things that I really loved about Obama was that she *wasn't* in a sorority, because I felt like she served as a model of accomplishment and achievement for black women who did not make that choice (or were shut out of the choice for political reasons or whatnot at their particular schools).

Love this post! My partner and I are both enamoured of Michelle Obama. As far as I'm concerned, she's a role model. I don't care what colour her or my skin is.

The haters, though, are really grasping at straws these days, and showing how bankrupt their so-called ideas are. It's so much easier to tear something -- or someone -- down than to build. Puts them in the same league as vandals.

great post. Michelle IS one of a kind...and i know she'll do so much for our generation.

1. Eleanor Roosevelt was an AKA? As in the green and pink?

2. Thank you for calling the feminists out on their racism. Of course this is par for the course for them considering how they were willing to vote for McCain over Obama, even though Obama and Clinton shared similar policies. More and more I'm starting to learn that the feminist leaders seem to be about as bad as the LGBT leaders.

3. Michelle is an inspiration to us all. She's holding it down and keeping it classy.

Yes, Eleanor Roosevelt is an AKA.

Any time that black people are in the public eye...there is always a racist element that tries to CLAIM that any representation of intelligence or grace is an IMITATION of whiteness.