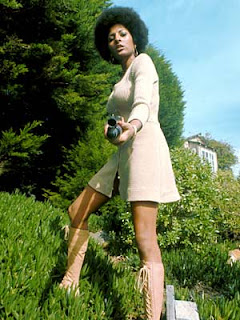 I loved me some Pam Grier back in the day and still do. I grew up in an era when Blaxploitation era films were flooding the movie theaters after a long melanin free absence of people of color from the silver screen.

I own Coffy and a few other Pam Grier films such as Jackie Brown, and loved her in the L Word.

Pamela Suzette Grier was born in Winston-Salem, NC and was a military brat who traveled around the world with her parents. She eventually ended up in Denver and graduated from East High during her teen years after living in England and Germany. The 5'8" Pam competed in a few beauty pageants to earn money for her college tuition. 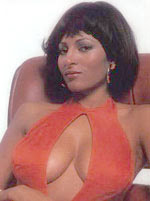 She moved to Los Angeles and was discovered while working as a switchboard operator at American International Pictures.

She was called the 'Queen of American International Pictures' as Foxy Brown, Coffy, Sheba Baby, Scream Blacula, Scream and The Big Dollhouse racked up big box office numbers and made her a household name. She was one of the sistahs back in the day that boys and the men of the 70's drooled over (and probably still do).

She's a cousin of NFL Hall of Famer Rosey Grier and once dated Hall of Fame baller and historian Kareem Abdul-Jabbar, and comedian Richard Pryor. 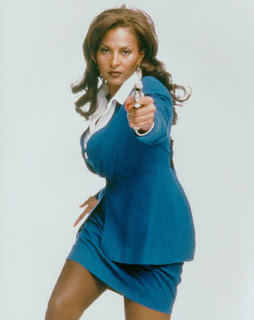 The cool thing about many of Pam's films back in the day was that many of her characters were good girls who were wronged, and ended up kicking ass and taking names while fighting for justice.

When the Blaxploitation film genre wound down, Pam's career went on hiatus for a while until the late 80s. She started getting supporting film roles and making guest television role appearances on shows such as The Fresh Prince of Bel Air.

One memorable one for me was when she played a transwoman in the 1996 movie Escape From LA before getting the Jackie Brown role the next year that put her back on the Hollywood 'A' list. She was also a cast member in the highly acclaimed cable series Linc's and of course, you L Word fans recognize her as Kit Porter and from her recurring role on Law & Order: Special Victims Unit. 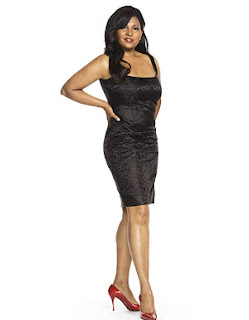 Pam has had her share of hard knocks as well. While filming one picture in the Philippines she contracted a rare tropical disease that left her bald and temporarily blind for a month.

She had a more serious health crisis in 1988 when she was diagnosed with cancer and was given 18 months to live, but she beat it.

As you can see this tough sister is still surviving and thriving today. Although this talented actress has yet to win any of the numerous awards she's been nominated for, she's number one in many of her fans hearts.
.
Posted by Monica Roberts at 11:00 AM