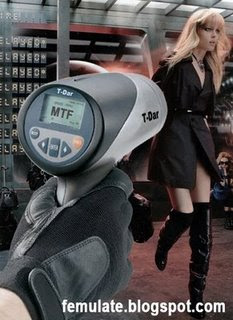 One of the issues that goes hand in hand with how well we are blending in with society is the concept similar to our gay and lesbian cousins of 'gaydar'.

We call it T-dar, and it's our alleged ability to pick out a transperson as they're out and about in the world based on our insider knowledge to transgender issues and other myriad characteristics.

There was one day several years ago I was visiting a transgender friend in New York and she challenged me to a test of my T-dar abilities by screening one of the Maury Povich 'Can You Tell' shows he does during sweeps month.

Just like 'gaydar', it's an inexact science. Sometimes you're dead on target in terms of picking out transpeeps, and other times you are so far off base it can lead to some very embarrassing moments.

It can also lead to moments that can put you in danger, whether you are a cisgender or transgender woman.

A few years ago in Louisville we had an incident in which a six foot tall broad shouldered white woman with a short haircut was accosted by several inebriated white males, peppered with accusatory derogatory insults of either being a transwoman or a lesbian and nearly attacked before a bystander came to her rescue.

The ironic thing was that she was attending the Southern Baptist Theological seminary at the time, a place and a religious denomination which has pimped anti-GLBT hatred for right wing political reasons.

T-dar basically speaks to the point that I've noted over and over again that we are a blend of characteristics from mommy and daddy. I know 5'4" girls that wear double digit shoe sizes and men who have faces and hand sizes in what would be considered the feminine range.

We all have something about us that is assumed to be part of the other gender, and cultural obsessing over it needs to cease and desist.
Posted by Monica Roberts at 11:00 PM