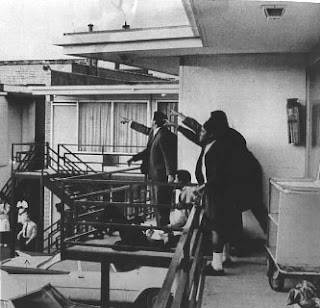 Today is the 41st anniversary of the assassination of Dr. Martin Luther King, Jr. in Memphis.

I tend to get a little introspective on this day on multiple levels. First because of the historical significance of the event. I think about the man being taken away from us at age 39 and wonder how differently would life in the United States have been if his strong voice reminding us about our moral and ethical responsibilities to each other weren't stilled on the balcony of the Lorraine Motel.

I think about what he achieved in his 39 year lifespan and remember to make every day count. I'm also reminded of the fact it's exactly one month before my birthday, and I tend to for the next four weeks take a hard look at where I am in my own life, if I've reached any goals I'd set for myself to achieve in the past year and try not to get depressed if I haven't done so yet.

But back to the drum major for justice.

If Dr. King were around I think he'd be pleased on some levels as to what we've achieved in American society, but on others he'd tell us we have much work to do. I believe that Dr. King would also be critical of megachurches and their 'prosperity gospel', and their reluctance to fulfilling the traditional role of the Black church in standing up for the powerless and speaking truth to power.

This day is also a solemn reminder that fighting for justice and equality for all is not an easy endeavor. Some people like him paid with their lives so that the rest of us, as he said in his 'I've Been To The Mountaintop' sermon, could get one day closer to the Promised Land of achieving 'The Dream'.
Posted by Monica Roberts at 12:29 AM

Agree with Dennis, and thank you for this post...auugh I can't believe I almost forgot it was TODAY not the 6th.

Below is a link to a free flyer in honor of Dr. King. The global poverty statistics included in the flyer - those in King's time - and those in the present - are shocking. Passing on the information this flyer contains would certainly be an excellent way at both honoring King's vision, and opening others' eyes to the currently still dreadful state of humanity.
**Can you take to heart the words King spoke just 4 days before he was gunned down? That's what this flyer will ask you. Take the King Challenge - in his own words - and see. If King were alive today, he'd tell us to bail out human beings, not banks. He was about to mount a Poor People's Campaign before he was killed. 41 years later and we still need a poor people's campaign.
Here's the link to the King Challenge flyer:
http://www.datafilehost.com/download-f335080c.html

Nicely written, as always! Wow, I didn't remember that Dr. King was only 39 when he was murdered. He was such an inspiration to me when I was growing up. I lost two role models that year, and he was one of them.

Thank you for presenting this timeless video!