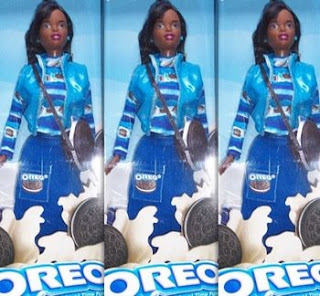 I'm a Barbie fan and own a few of my own, and in this 50th anniversary year I thought I'd mention a Barbie design that didn't go over so well with a segment of the public.

Usually the Mattel folks are pretty savvy and on target when it comes to creating various Barbies, but on this one they missed badly. Somebody either wasn't paying attention or they didn't have any African-Americans in the R&D department to tell them how problematic having a Black Oreo doll would be.

In 1994 as part of a store cross promotion with Nabisco, they created a white Oreo cookie Barbie that was sold in grocery stores. The doll flew off the shelves and in 1997 they decided to produce a Black version of it. 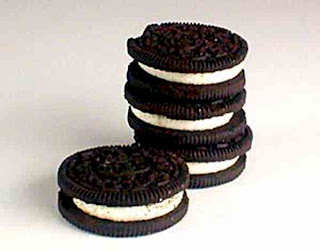 While I understand what Mattel and Nabisco were trying to do in cross promote the world's most famous doll, the Oreo cookie line and creating as diverse a lineup of dolls for it as possible, Oreo has another connotation in the Black community beyond just being a slammin' cookie.

Calling someone an 'Oreo' is fighting words. It means that you are calling them Black on the outside and white on the inside. Translation, you call a Black person an Oreo, you are accusing them of being a sellout or an Uncle Tom to the race.

It's an image that is so ingrained in the African-American community's mind Michael Steele tried to seize on it by claiming that progressive Blacks threw Oreo cookies at him handed out by Democrats during a 2002 Baltimore debate appearance for the Maryland governor's race, a claim which has largely been debunked.

Predictably the doll sold so poorly it was recalled. It's ironically a highly sought after doll by Barbie collectors.

By the way, has anyone sent one to Condoleezza yet?
Posted by Monica Roberts at 12:30 PM