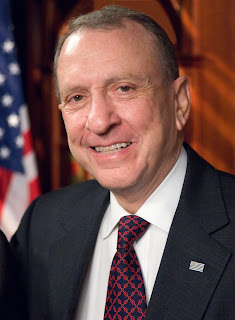 "Last year, more than 200,000 Republicans in Pennsylvania changed their registration to become Democrats. I now find my political philosophy more in line with Democrats than Republicans."

Specter was greeted by a loud, sustained round of applause by dozens of constituents outside his Washington office shortly after the news broke.

"I don't have to say anything to them," a smiling Specter said. "They've said it to me."

The five term senator announced today that he is switching parties, thus guaranteeing that once sore loser Norm Coleman get the legal smackdown again and Sen Al Franken finally gets to take the senate seat he earned almost 100 days ago on behalf of the people of Minnesota, the Democrats will have the ability to shut down filibusters in the Senate.

First elected in 1980, he was once of the few GOP moderates left in the northeast United States. It's now a conservative, increasing ideological party that has shrunk to basically being strong only in the Deep South. Specter joins the 200,000 Pennsylvania Republican moderates fleeing the increasingly batturd crazy GOP.

President Obama's reaction was the same as many Dems. According to Politico.com the president reached Specter, one of only three Republicans to support his stimulus package, on the phone at 10:32 AM EDT and told him "you have my full support." He added that we are "thrilled to have you."

Specter however sounded a cautionary note that just because he's now a Democrat doesn't mean that he won't be as independent as he was on the GOP side.

“I will not be an automatic 60th vote,” Specter said. “I would illustrate that with my position on employee choice, also known as card check. I think it’s a bad deal and I’m opposed to it. I will not vote to impose cloture. If the Democratic Party asks too much, I will not vote with them."

Welcome to the party Sen. Specter. As long as you're with me 80-90% of the time, I'll forgive the times you vote your conscience and aren't.
Posted by Monica Roberts at 1:25 PM