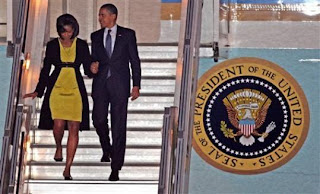 It's so cool to see my president go away on a foreign trip and I don't have to cringe like I did over the previous eight years in horrified embarrassment because of his breathtaking stupidity or nekulturny behavior.

It's been an absolute joy to watch President Obama and First Lady Michelle Obama represent us well while on the first European trip of his presidency for the G-20 London summit and the NATO meeting in Strasbourg, France. 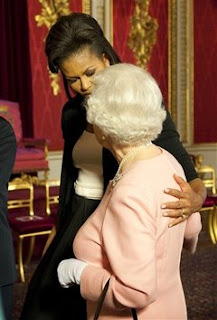 It's also been gratifying to see the love showered down on both of them from other world leaders and the world press while the conservahaters sip on their GOP red Kool aid and rant. I know German Chancellor Angela Merkel is happy that Junior's back in Texas. She won't be getting any more unwanted massages from him.

It galls you even more when Queen Elizabeth II is so enamored with the First Lady that she hugs her first.

And riddle me this conservaidiots, when did Bushie boy during his misadministration not only give a speech in which the English language wasn't mangled, but took questions from the audience like President Obama did in Strasbourg?

And we're not even 100 days into his presidency yet.

Hate on conservatives. Can't help it if you poor babies are bitter because the world loves our current president and First Lady and hated yours.
Posted by Monica Roberts at 11:08 AM

The President and First Lady rock! This trip was excellent. Obama has already done so much to repair the relationships that Bush trashed in seven years.

And the right wingers are hatin' every second of it. I haven't seen them this off the chain since the first Clinton administration.

Barack and Michelle did a wonderful job representing the U.S. over in England!