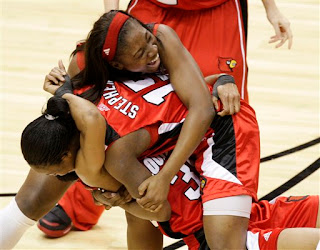 I'll have to DVR it, but tonight's NCAA women's title game in St; Louis is an all Big East affair between the surprising (to the rest of y'all) 34-4 Louisville Lady Cardinals and the unbeaten 38-0 UConn Huskies.

This is the third meeting between the two teams. They met in the regular season and the Big East women's tournament title game and the Lady Cards have been on the short end of both of them.

But as I know painfully well from my college days, just because you have a dominant team doesn't mean that you can't be beaten or you can't have a bad night. It's also hard to beat a team three consecutive times in the same season. 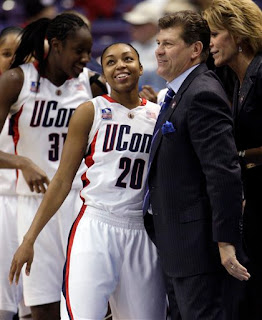 Talk about what a historic upset that would be. Here's a UConn team that beat them badly twice by 28 and 39 points, is playing for perfection for the third time, their seventh NCAA title and is chock full of high school All-Americans versus a Louisville team with none.

If you check my 2009 women's NCAA bracket, I have UConn picked to win the title and actually had the Cards losing to Oklahoma Sunday.

The Lady Cards have a chance to elevate this program to an elite level and shocking the world like a loquacious boxer from the West End once did over 40 years ago.

And here's hoping they do. Go Lady Cards!
Posted by Monica Roberts at 8:15 AM

I have said it all week " Just say no to UCONN"