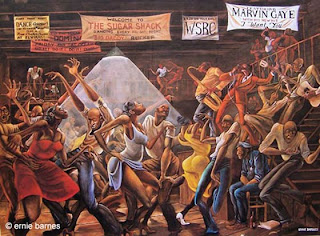 If you were a devoted fan of Good Times back in the day, you know that Jimmie Walker's James Evans, Jr. character was an artist. That character and the show introduced the rest of the world to the artwork of Ernie Barnes.

'The Sugar Shack' dance scene appeared on Marvin Gaye's 1976 I Want You album and the closing credits of Good Times. It also inspired a generation of artists. Collectors of his work range from Ethel Kennedy, various professional sport team owners to Sylvester Stallone, Eddie Murphy, the late Sammy Davis, Jr., Kanye West, and from Seton Hall University to the California African American Museum. 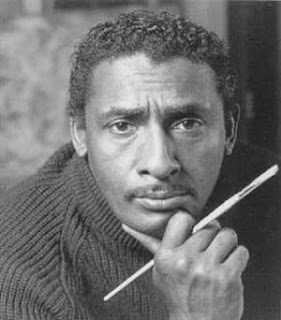 His signature style uses elongation and distortion to convey a sense of power, fluidity, grace and intensity, addition to featuring people with closed eyes because as he put it, 'we are blind to people's humanity.'

Barnes was born in Durham, NC on July 15, 1938. His love of art began when he would accompany his mother to her job at a prominent local attorney's Frank Fuller, Jr's home in which she oversaw the staff. The attorney had a large collection of art books that young Ernie was allowed to peruse which fueled his passion for art. 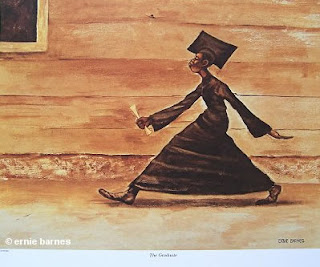 In junior high Ernie was an overweight and introverted kid taunted by bullies, and spent that time sketching in a notebook. A sympathetic teacher who recognized his artistic talent put him on a weightlifting program. It allowed Ernie to excel in football and track in high school to the point in which Ernie was the state shotput champion in his senior year

He was drafted by the Washington Redskins in 1959, but that was problematic once they discovered he was Black. The Redskins racist owner George Preston Marshall refused to integrate his team until 1962, and they traded Barnes to the then NFL world champion Baltimore Colts. After playing for the Colts for a season he moved to the rival American Football League in 1960 and played for the New York Titans, the San Diego Chargers in 1961-1962 and the Denver Broncos in 1963-1964. 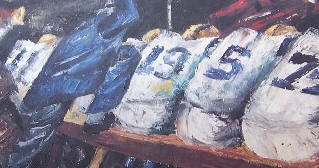 He still pursued his love of art while playing and painted his first piece called 'The Bench' which sold for $25,000 at a Denver show. A painting of his caught the attention of Barron Hilton, who commissioned him for a piece and encouraged him to successfully apply to become the official artist for the AFL. His artwork began appearing on the game day magazine programs across the AFL.

That led in 1965 to New York Jets owner Sonny Werblin noticing his work, and after having three art critics appraise it Werblin commissioned him to do thirty paintings. It led to a critically acclaimed 1966 art show at Grand Central Art Galleries in Manhattan that jump started his art career and led to his retirement from pro football.

In 1984 Barnes was named the 'Official Artist of the Games' and commissioned by the Los Angeles Olympic Committee to create five paintings to commemorate the LA Games. He was also commissioned by the NBA to create 'A Dream Unfolds' for the league's 50th anniversary, 'Fastbreak' for LA Lakers owner Jerry Buss, and the owners of the New Orleans Saints, Oakland Raiders and Boston Patriots football teams.

Former Baltimore Colts teammate and Carolina Panthers owner Jerry Richardson commissioned Barnes to create 'Victory In Overtime', which is now on permanent display at Bank of America Stadium in Charlotte.

There are ongoing plans for a traveling exhibit of Ernie Barnes art entitled 'Liberating Humanity From Within' which will be coming soon to an art gallery near you. 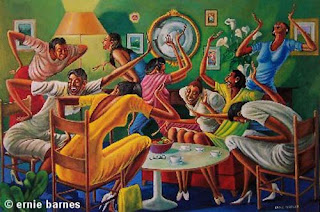 "Ernie Barnes is one of the premier figurative artists of the late 20th and early 21st centuries," said Paul Von Blum, a senior lecturer in African American studies, communication studies and art history at UCLA.

"His richly detailed paintings and drawings chronicling the lives of people have made a profound contribution to the contemporary history of American art."

Von Blum said the works that Barnes produced over 40 years "elevated him to the top rank of African American artists in the United States" and "solidified his stature in the grand tradition of visual art, a reputation that will serve as a model for younger artists for generations to come."

I agree. He will be missed.