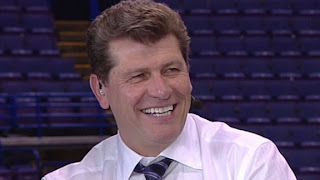 The Drive For Five starts September 23, 2010 in the Czech Republic.

The five I'm talking about is the quest for a fifth straight Olympic gold medal for the FIBA World Number One ranked Team USA women ballers.

While the final roster for the 2010 FIBA Worlds is yet to be determined, we already know who'll be coaching our lady hoopsters.

Earlier this month it was announced that UConn's Geno Auriemma will lead the USA Women's senior national team at the 2010 FIBA Women's World Basketball championships in the Czech Republic September 23-October 3 and the upcoming London Olympics in 2012.

"I don’t know if I can adequately describe my feelings and my emotions when I was asked to do this and how I felt ever since," said Auriemma. "It’s an opportunity that if you’re very fortunate comes once in your life and I never thought I would ever have this opportunity. It’s just overwhelming, the emotions that run through you. What an incredible honor it is to be selected."

"There is no better coach in America than Geno Auriemma and we are delighted to be able to have a coach of his caliber lead our women’s national team program through the 2012 Olympic Games," said USA Basketball Chairman Jerry Colangelo. "The USA Basketball women’s national team has achieved tremendous success over the years and as winners of the last four Olympic gold medals, the expectations remain very high. Geno’s success at UConn, both his win-loss record and the development of his players, speaks for itself and makes him a perfect choice to take hold of the reins." 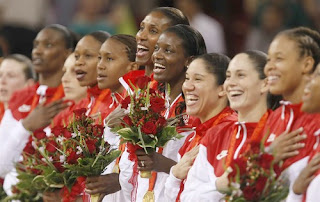 The USA has already qualified for the 2010 FIBA Worlds due to their gold medal winning performance last summer in Beijing. The winner gets the automatic bid to the London Games which will take place July 27-August 12.

While Team USA has recently dominated international play posting a 63-1 record in the last 12 years, their success has been mixed at the FIBA world championship level. While Team USA is one of four nations to win the FIBA women's championship and is the most successful with 7 titles, the last one for the USA women came in 2002. The Australians took the 2006 gold and have every intention of keeping it away from their bitter rivals.

But I think they would rather take care of business next year and have the luxury of time in choosing the twelve women who will attempt to continue the current US dominance of women's international basketball.
Posted by Monica Roberts at 5:58 PM