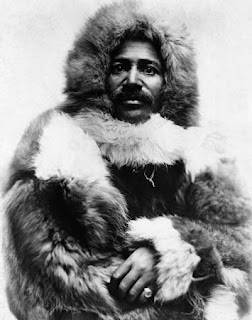 Today is the 100th anniversary of Matthew Henson becoming the first man to reach the North Pole.

Born in Charles County, MD on August 6, 1866, he became a cabin boy on a steamship after his parents died during his youth. He became a skilled navigator and seaman while self educating himself during those around the world voyages for the next several years. 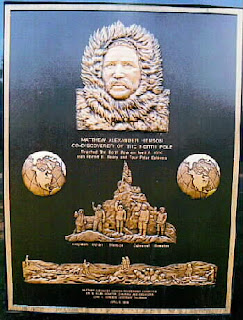 He met Admiral Robert Peary in November 1887, who promptly hired him for an expedition to Nicaragua to survey a possible canal route. Impressed by his seamanship, he recruited Henson as a colleague and together they undertook many voyages together to the Arctic. Henson was admired by the Inuit people for his hunting and sled-driving skills, as well as his ability to fluently speak their language and fathered his only child with an Inuit woman.

On his and Peary's eight attempt to reach the Pole, on April 6, 1909, Henson arrived along with four Inuits at Camp Jesup, 89°47', 45 minutes ahead of Peary, concluding by dead reckoning that he had reached the Pole. Henson greeted Peary, "I think I'm the first man to sit on top of the world." 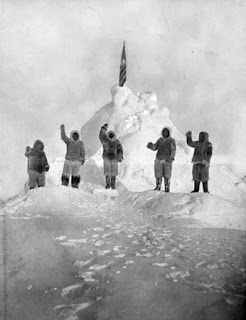 Henson later recalled that this angered Peary. "Oh, he got hopping mad … No, he didn't say anything, but I could tell," wrote Henson. Henson wrote that Peary "fastened the flag to a staff and planted it firmly on top of his igloo."

Peary was heated because he'd been ill, was exhausted and could no longer continue on foot. He sent Henson ahead to scout, and he was supposed to stop just short of the pole so that Peary could arrive later on sled and claim the historic first. They overshot their target by a few miles, but it was clear by Henson's footprints that he'd arrived at the Pole.

In the wake of that expedition, Henson and Peary's once warm relationship turned as frosty as the terrain.

Henson in 1912 wrote a book called Negro Explorer at the North Pole which chronicled that trip, since history was being whitewashed and Admiral Peary was being lauded as the first man to reach the Pole. 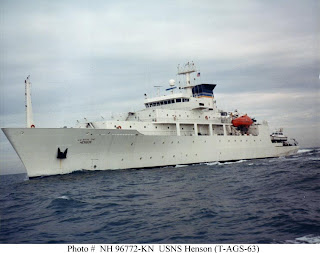 Henson did eventually get his props for his historic achievement. In 1944 Congress awarded him a copy of the same medal they gave Peary, and he was honored by Presidents Truman and Eisenhower before his death on March 9, 1955.

On April 6, 1988, in the presence of his Inuit and American relatives, Matthew Henson was reinterred at Arlington National Cemetery next to Admiral Robert Peary. The United States Navy in 1996 commissioned the Oceanographic Survey ship USNS Matthew Henson in his honor. 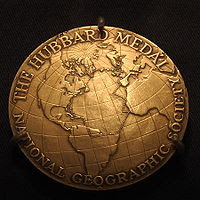 Interestingly, one of those relatives is actress Taraji P. Henson

On November 28, 2000 The National Geographic Society posthumously awarded Henson the Hubbard Medal, which is given for distinction in exploration, discovery, and research. Admiral Peary had been given the award in 1906 but race relations being what they were at the time, snubbed him.

Oh I remember this! I didn't know the anniversary was today though, I remember hearing about Henson back in middle school and being so interested...then not again until 11th grade. Yay school system.

I wanted to share information on this anniversary yesterday, however, I didn't do it. It is a blessing that you shared such detailed information about this brother's life and times. It is crucial that we share OURstory whenever possible. Thank you!

Hotep Villager,
I come from a family of historians, and sharing our history is a major portion of this blog's mission.