You Just Now Figuring That Out, Mara? 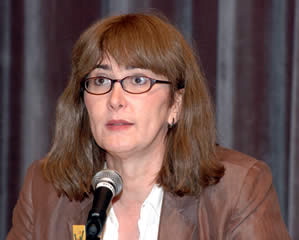 Mara Keisling, the ED of NCTE, had this to say to Metro Weekly about  the ENDA bill languishing in Congress.

Mara Keisling, the executive director of the National Center for Transgender Equality, had a key legislative priority for the 111th Congress: passage of the Employment Non-Discrimination Act.
With Congress in recess until after the midterm election and no expected chance of passage in any lame-duck session, Keisling is characteristically blunt.
”I failed.”

You just now figuring that out, Mara?

This is a new decade with new rules.   The trans community cannot tolerate people who aren't doing their jobs to move our legislative agenda and the trans community forward.   Keisling has been at the helm of NCTE since 2003, and what has this community gotten under her leadership?


While I have my own opinion on Keisling's NCTE job performance or lack thereof, ENDABlog's Kat Rose as usual tells it like it T-I-S is and gives her assessment about the sorry state of affairs.
Posted by Monica Roberts at 2:30 PM