Yo Sally, Why You 'Scurred' To Debate Brittany? 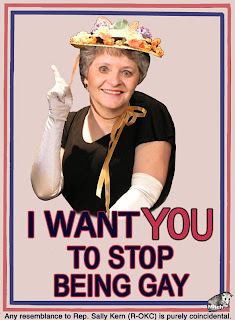 Sally Kern is running like Flo Jo from a debate with Brittany Novotny.     Why is that?

Is she 'scurred' that Brittany will mop the floor with her and make her look as stupid and out of touch with Oklahoma HD 84 voters than she already is?

Is Kern afraid that she will have to defend her record of spending more time pimping social conservative issues and being their poster child than dealing with the local legislative issues that the residents of HD 84 wish she would tackle?

Is she trying to deny Brittany a platform to describe her JET Program (Jobs, Education, Transportation) and the other ideas and initiatives she has on her website that she believes will stimulate economic development for the district and the state of Oklahoma?

Well Sally, in 20 days you'll find out if your political strategy worked or if the voters of HD 84 replace you with a younger state rep with ideas grounded in 21st century America, not an 18th century one.

TransGriot Update:  Looks like Sally's finally going to appear at the same time with Brittany on TV.   On Sunday October 24 they will be appearing on a local political show called "Flashpoint" airing on Oklahoma City's local NBC affiliate.