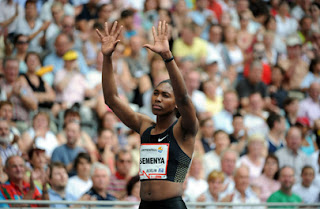 This star crossed edition of the Commonwealth Games has its opening ceremonies in Delhi, India today, but there will be one well known athlete who organizers and others were hoping would bring some star power to the event that won't be coming.

2009 800m world champion Caster Semenya won't be part of the South African team for these games.  She's staying home to deal with a back problem.

She stated that she'd been having serious lower back pain and had not been comfortable during her last few races.

The South African sports authorities want to save her for more high profile events such as the 2011 IAAF Athletics World Championships and the London Olympics.

"It would serve no purpose to have an athlete in Delhi who was struggling with any sort of injury that would compromise performance and it is our medical view that physically and emotionally she would not be capable of doing justice to her talent at an event of this magnitude," said Team South Africa's Chief Medical Officer Shuaib Majra.
While it would have been nice to see you run and win in Delhi, the 2011 IAAF Championships and the 2012 Games are the bigger prize.    Get well and hope to see you kicking butt and taking names in the world's various meets soon.
Posted by Monica Roberts at 2:00 AM