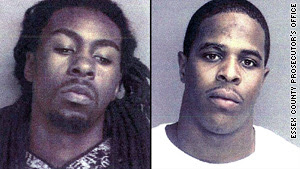 The second suspect in the Victoria Carmen White killing in Maplewood, NJ turned himself in to the Newark Police late Sunday night according to NJ.com and Acting Essex County Prosecutor Robert Laurino.

23 year old Alrashim Chambers turned himself in at the Newark Police Department’s 4th precinct and is also being held at the Essex County Correctional Facility on a $1 million bond.    Marquise Foster surrendered while accompanied by an attorney on Saturday night.

In addition to facing murder and weapons charges, they are also being investigated for a possible additional charge of a bias crime.in the murder of 28 year old White.

Now that both subjects are in custody, the next phase can begin in terms of gaining justice for Victoria.

Posted by Monica Roberts at 2:15 AM