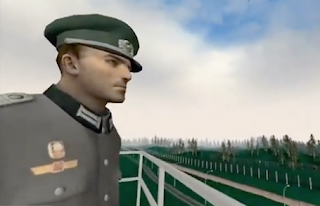 I've talked about the 'Anti fascist Protection Barrier' as the dearly departed Deutsche Demokratische Republik euphemistically used to call the fortified border separating themselves from their West German cousins during the Cold War.  I immediately thought about it as a Kennedy baby in the context of Republican calls for the US to build a fortified border wall sarcastically called the 'Tortilla Curtain' to slow down the flow of undocumented crossings from Mexico.

The Cold War era border is back in the news in the wake of the 20th anniversary of German reunification.  A video game that was set to be released on that October 3 date has caused controversy in Germany..

As part of his university degree studies at the University of Design, Media and Arts, 23 year old Jens Stober created 1378 (km).   The title of the game refers to the length in kilometers of the old fortified Inner German Border and is set in 1976, when the IGB received one of its deadly upgrades..

1378 (km) is a first person shooter game in which up to 16 people can play taking the roles of either the East German Grenztruppen or East Germans trying to escape.

"Becoming an East German escapee or border guard enables players to identify with these figures," Stober  said. "It's a novel way of encouraging young people to take an interest in coming to terms with recent German history."


Rainier Wagner, the chairman of the Association for Victims of Communist Tyranny, has a different view of the game.   He was arrested trying to cross the wall and spent two years in an East German prison for attempting to do so.   He's one of a long list of critics that include German politicians who are offended by the game.

Wagner is quoted in a BBC article on the game that 1378 (km) is worse than other first person shooting games because you are shooting at unarmed civilians instead of armed enemies.

Stober counters that the game later skips to the year 2000 and the border guards have to face trials for what they've done in the name of the East German regime.

Stober's Karlsruhe based university, while releasing a statement apologizing to the people who lost family members attempting to flee East Germany, is standing behind and offering support to Stober. 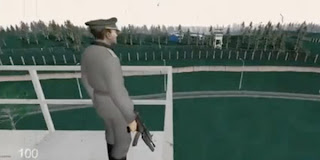 Whether 1378 (km)  is a new way of exposing kids to recent German history or a tasteless shoot-em-up, one thing that is guaranteed is the internal debate in Germany about the game will be a fierce, emotional one.