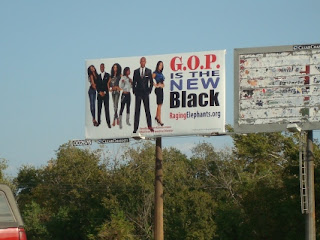 While I was rolling home on Loop 610 eastward  past the Scott Street exit enroute from spending an enjoyable Sunday afternoon with my cousins out in Alief I passed the latest creation from the conservafool behind the false MLK billboard that made me do a double take.

The latest one states that 'GOP is the new Black'.   Really?   In what alternate universe?

Thank God I'd had time to digest my food and have a few glasses of red wine to mellow me out before seeing that divorced from reality piece of  propaganda.

Did your cookie chomping behind not think Black peeps weren't paying attention for the last two years?   Unlike your easily bamboozled low information Tea Klux Klan followers, you can't sell those woof tickets to us.

Your party has openly disrespected the first African-American president, the First Lady and his family, made loud calls in predominately white forums where you can count the number or non-whites there on two hands to 'take our country back',  and every Black conservative running for office flaps his or her lips to parrot failed policies that the other 90% of us grounded in pragmatic reality oppose because they harm our community.

Apostle Claver and his GOP sellouts need to quit being house Negroes that loves their GOP massa and join the rest of us in the fields fighting the powers that be.

But no, they like being in the GOP big house with Michael Steele, Pat Buchanan and company too much.