Howard University Forum On Being GLBT And Greek

The Divine Nine frats and sororities have been a groundbreaking part of the African American community for over a century and have evolved as our community has.

I've talked about in these electronic pages about whether they are as ready to accept transpeople in their ranks, but was heartened to see a Kristen Briscoe article in the Howard University student newspaper about a recent panel discussion that tackled the topic of being gay while in a Greek sorority or fraternity.

It was fitting that this panel discussion took place there since five BGLO's (Black Greek Letter Organizations) ,  Alpha Kappa Alpha, Delta Sigma Theta, Phi Beta Sigma, Zeta Phi Beta and Omega Psi Phi were all founded at various times on the Howard University campus
The forum drew a crowd of over 100 students and faculty that packed Room 136 of Douglass Hall and was hosted by CASCADE, Howard's gay-straight alliance organization.

Theara Coleman, the sophomore English  student chairing the event stated,"The purpose of this discussion is to break down preconceived notions of Greek organizations." 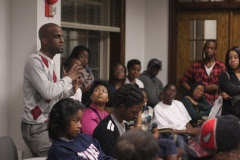 One of those preconceived notions is that BGLO's are homophobic and transphobic.

This discussion featured a panel comprised of six Howard students and alumni who are openly gay and active in their Greek letter sorority or fraternity.

The panelists were asked questions about their experiences inside these organizations.
It was a lively meeting that concluded at 9 PM and the panelists noted to the assembled crowd that they hadn't faced any negativity within their various organizations

As Howard alum Valerie Jones was quoted as saying to assembled throng, "It's because of the leader that I am that I was brought into the organization, not my sexuality."


One of the more controversial questions asked to the panel was how they balance being a part of a Greek organization while remaining true to their own identity.

"What I do behind closed doors doesn't affect my ability to participate in my organization," Teron Stocks said. "I shouldn't have to feel like an alien because I'm gay."

The meeting also brought home the point that Black SGL people are part of our African-American community.  We like everyone else in it have talents and skills that we are ready, willing and able to contribute to help build the community and the various organizations that help do that work.