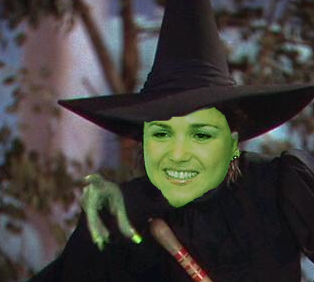 Halloween falls on Sunday and we have a critical midterm election happening on Tuesday.   So yeah, there's going to be a lot of anxiety for many of us on the liberal-progressive side.

We are genuinely worried that some of our base is going to sit at home while large numbers of stupid right wing people are going to bumrush the polls to vote for even stupider and dangerously radical folks and put them in office .

The words Sen. Rand Paul and Sen. Sharron Angle scare me more than any horror movie Hollywood could come up with.

So let's segue right into our business du jour, choosing our Shut Up Fool of the week.   It's the last week of a campagn, so there was plenty of stupidity to go around.    Honorable mention goes to Clint McCance, the now resigned ex- vice president of the Midland, AR  school boar who let lose with so vile homophobia on his FB page.

This week's SUF winner was brought to my attention by Renee of Womanist Musings.   It's Tea Klux Klan member Al Reynolds, who is running for the Illinois Senate 52nd district.

The more y'all flap your gums, the more racist y'all sound.    "The minority men find it more lucrative to be able to do drugs or other avenues rather than do education. It’s easier.” .

Ah, this BS combined with the old 'more Black men in jail than college' meme. that rears it's ugly head once again.   .

Okay, time for Moni to blow this lie up.   According to a report issued in 2001 by the American Council on Education, 635,198 Black men attended higher education institutions in 2001 (the vast majority of which were 18-24). Of the 803,400 Black men in the nation’s state and federal prisons and local jails in 2001, just 189,200 were 18 to 24 years old, the prime age of collegiate men.    Nearly 76 percent of these Black male inmates were 25 and older, the Bureau of Justice Statistics reported.

That means there are more than three times as many black men aged 18-24 in college than there are in jail.