Time To Tap Into Past Lessons

As African descended transpeople we are part of a legacy of people who rolled up their sleeves and busted their behinds to build community in the wake of emancipation. .

Despite tremendous odds, fierce opposition and other challenges, they managed to leave a legacy of success for the African American community to build on.

Now that we are in the second decade of the 21st century, as heirs to that legacy, it is past time that we African descended transpeople role model what our ancestors did.


One of the most important factors in that effort will be knowing and reclaiming our trans history while simultaneously gleaning lessons from our African American one.   If you don't know where you've been and what you've done, you don't have a measuring stick to compare your past progress to what is happening presently, and you will have a harder time in making wise decisions that build community for the future.

I believe by examining our history, we will find the keys to building community are contained in replicating much of how our ancestors did in the last century. 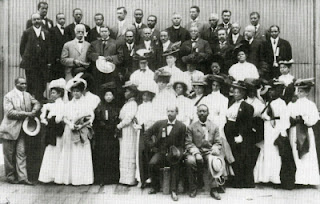 Because now is the time for us to do so.   To paraphrase what W.E.B. DuBois wrote over a cenutury ago in his 1905 Statement of Principles for the Niagara Movement,  "We refuse to allow the impression to remain that the African-American transperson assents to inferiority, is submissive under oppression and apologetic before insults.”

Frankly, we're tired of looking inferior when compared to our white trans brothers and sisters,  frustrated that we seem impotent as we take the brunt of the oppression aimed at this community and are fed up with looking apologetic while insults are hurled at us by friend and foe alike.

It's nation time, people.   Time for the dawning of a new and wonderful decade of achievement, pride and success for African descended transpeople.   Time for us to tap into our energy, talents and determination to reverse the jacked up status quo situation we find ourselves in.

And the beautiful part is that we don't have to reinvent the wheel to do so.   We already have the roadmap to do so in place.  All we have to do is peruse it and adapt it to current conditions.  .