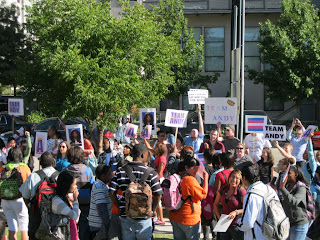 The struggle continues in Dallas.

Queer Liberation held a rally outside of North Dallas High starting around 3:30 PM to support Andy Moreno and her battle against transphobic principal Dinnah Escanilla that started over her opposition to Andy running for homecoming queen.

Principal Escanilla was allegedly on vacation, but she mishandled this from the beginning.     Had she just followed DISD's non discrimination policy and just allowed Andy to run and she'd lost fair and square, there'd be no drama.   Escanilla's transphobia has blown this up to be a bigger story than it would have been had Andy run and won and it might have legal and fiscal consequences for the district as well. .

The legal aspect of this Andy Moreno remains to be seen and played out.   .   . 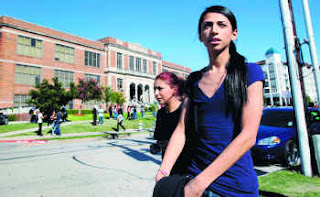 But here's the human cost of it.   Andy will always carry with her the fact that the principal kept her from running in this homecoming queen race.   She'll always wonder if she would have won it.

In addition to Andy being screwed, the eventual winner of the homecoming crown is the loser as well.