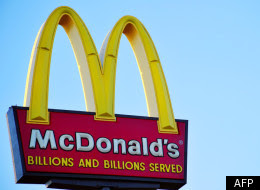 Conservafools will go to any lengths to get to that magic 51% mark of voters since they know the policies they espouse no rational human being would vote for .

In addition to lying, bait and switch tactics, and cutting off access to reporters determined to get to the truth of their policy positions,  they use voter suppression and intimidation as well.

An example of this is McDonalds franchise owner Paul Siegfried in Canton, Ohio.   He enclosed a letter with employee's paychecks that threatened lower wages and reduced benefits if the Republifools didn't win on Tuesday.


"As the election season is here we wanted you to know which candidates will help our business grow in the future," reads the letter. "As you know, the better our business does it enables us to invest in our people and our restaurants. If the right people are elected we will be able to continue with raises and benefits at or above our present levels. If others are elected, we will not. As always, who you vote for is completely your personal decision and many factors go into your decision."


Not surprisingly the letter conveniently pimps a list of candidates he believes "will help our business move forward."  that included Republican candidates John Kasich for governor, Rob Portman for Senate, and Jim Renacci for Congress.   The employee letter with McDonald's logo on it also includes Renacci's biography.

What Siegfried did was a violation of  not only Ohio state election law, but federal law as well.

It's probably costing him some business from angry Ohio Democrats in the Canton area, some legal fees and whatever money he donated to these GOP candidates.   One of the targeted Mickey D's employees instead of silently stewing about it, forwarded the letter to Canton law firm Schulman Zimmerman & Associates, who turned over the documents to local prosecutors, asking them to "investigate this matter for a criminal violation".


"The handbill endorses candidates who have in essence pledged to roll back the minimum wage and eviscerate the safety net that protects the most vulnerable members of our workforce," said Attorney Allen Schulman.   "But it's more than that. When a corporation like McDonald's intimidates its employees into voting a specific way, it violates both state and federal election law. It's no surprise to anyone that Ohio is a battleground state in this election, and for a multinational corporation like McDonald's to threaten employees like this is morally and legally wrong. This despicable corporate conduct is the logical extension of the Citizens United decision, which has unleashed corporate arrogance and abuse." 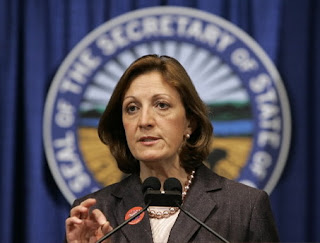 Secretary of State Jennifer Brunner (D) said she was launching an investigation because the action appeared to violate Ohio election laws and would hand off any findings to the state attorney general..

"Voter intimidation is a form of voter fraud. It is a serious offense requiring a strong response," she said in a statement.   She also issued a warning to all candidates in Ohio: "The election is just four days away. All involved would be best to play fair, fight hard for what they believe in and work together for all Ohioans and our country in this democratic process not enjoyed in countries elsewhere."


Sigfried, realizing that he has seriously screwed up, tried to cover his behind.  "Distributing this communication was an error of judgment on my part," he said in a statement. "Please know it was never my intention to offend anyone. For those that I have offended, I sincerely apologize."

Yeah right, dude.  You're only apologizing because you got caught and your behind is in serious trouble. 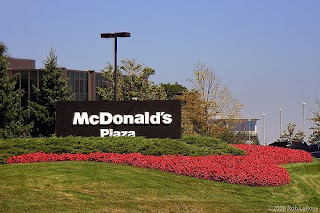 McDonalds USA swiftly chimed in with a statement that said the company respects its employees' diverse opinions, and "had no knowledge of this material being distributed" by its franchisee.

It was a position that was echoed by McDonald's Ohio Region General Manager Shirley Rogers Reece. .

"The content of this material is not reflective of McDonalds' position," she said in her statement."We remain bipartisan on these matters. That said, while clearly this was poor judgment, we don't believe it was intended to offend anyone."

Rep. John Boccieri, the current Democratic congressmember in Ohio's 16th district,  issued a statement that said in part: "In America, the people decide who represents them, not corporations. Our right to vote is sacred and people should have confidence that they can cast their vote this year, and any year, without being intimidated at the workplace."

Paul Siegfried and his GOP friends need to learn that lesson on Tuesday.