Damn-Gay Peeps Ain't Even Safe In The Stonewall Inn 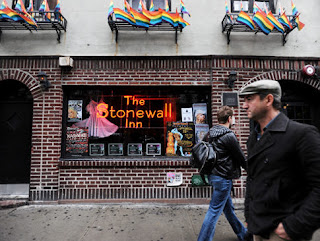 New York's Stonewall Inn is the most famous gay bar on the planet.    The world famous Christopher Street bar was the site of the 1969 riot that jumped off the modern TBLG rights movement and in 2000 was added to the National Register of Historic Places.

But according to the New York Daily News it was the scene of a weekend gay bashing that thankfully led to the arrests of the wastes of DNA involved.

Sadly, that wasn't the only phobic incident that happened in New York's most gay friendly 'hood.

On Friday night 20 year old Andrew Jackson was busted a few blocks away in Chelsea when he and a pack of unidentified pals brutally attacked three gay men who were kissing each other on the corner of W.25th Street and ninth Ave.


Damn, now the homophobes feel so comfortable in their hatred of LGBT peeps they not only bully our kids, but now they're coming into iconic buildings to do crap to us.

What's next?   Are they going to disrupt GLBT friendly churches and conventions? 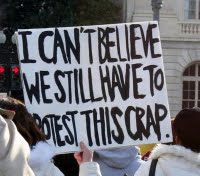 We've had a jacked up week with seven BTLG kids dying by their own hand because of bullying.  The community is still pissed about the stalled congressional civil rights agenda leading into a crucial midterm election in which anti civil rights candidates are using truckloads of corporate money to get elected.   We've had murdered transwoman Victoria White's identity erased by the Essex County, New Jersey criminal justice community..

When are we as a community going to say, 'enough is enough' and just straight up go off and aim direct actions and protests at the people and organizations actually responsible for oppressing us?

When are the protests going to be aimed at the people and organizations such as the Republican Party and their Tea Klux Klan auxiliaries, fundie Christians, the Catholic Church, various hate preachers such as Fred Phelps and conservative hate radio?

They are the ones stirring up the anti GLBT sentiment that is killing us, our kids, subjecting us to bodily harm and making our communities less safe.

When is that going to happen?