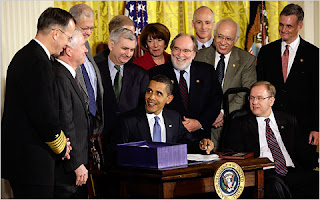 Today is the one year anniversary of one of those 'crumbs', the signing into law of one of the trans community's legislative Holy Grails, the Byrd-Shepard Hate Crimes Act.

Just to recap what it is, the Byrd-Shepard Hate Crimes Act is an expansion of the 1969 US federal hate crimes law to include crimes motivated by a victims actual or perceived gender, sexual orientation, gender identity or disability.   The law also directs the Federal Bureau of Investigation to track hate crime statistics.

This is what the president had to say about it one year ago.

But our legislative work is not finished.   We still need to pass an inclusive ENDA and an inclusive SNDA.
Here's hoping that finally happens and gets signed into law as soon as possible.