Yo Right Wingers, This Is What 1.5 Million People Looks Like 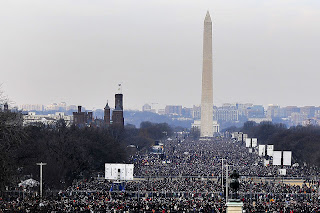 I've been cracking up over the last three days about the right wing lies coming fast and furiously about their Washington 'Hate On Obama' protest last Saturday.

Matt Kibbe, the head of FreedomWorks and the organizer of the "Tea Party" protest in Washington falsely claimed while on stage at the event ABC News estimated the turnout at 1 million to 1.5 million people.

They've even gone as far as to try to circulate on right wing blogs an old photo claiming it was their hatefest. In the interim their leaders and the attendees of these tea parties reveal what we already know.

The very next day ABC News rebutted that claim on their website and said they reported the DC Fire Department estimate of 60,000 to 70,000 people.

Nice try people. If you 'white' wingers really want to know what 1.5 million people look like, you need only to dial back the clock a few months to January 20 and the Obama presidential inauguration.

The crowd size was estimated by the DC Fire Department at 1.8 million

You only make yourselves look more pathetic every day.
Posted by Monica Roberts at 5:30 PM