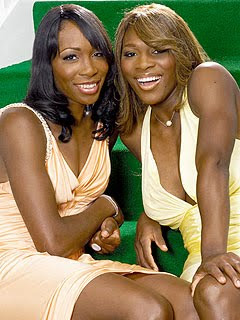 Serena and Venus Williams have been rewriting the tennis history books ever since their breakthrough Gland Slam victory ten years ago at the 1999 US Open.

My favorite tennis playing siblings are marching though the 2009 US Open field in the women's singles and women's doubles ranks seeking to add to the combined 18 Grand Slam titles they've already captured during their careers.

Not being content with making tennis history, last week they did so on another front. Principal owner and Managing General Partner Stephen Ross announced that the Palm Beach Gardens, FL residents have joined Gloria and Emilio Estefan, Marc Anthony and Jennifer Lopez in becoming limited ownership partners in the NFL's Miami Dolphins. 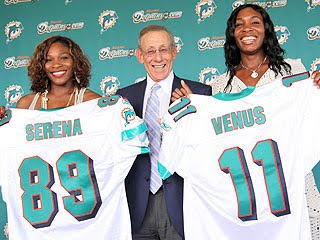 "I am so excited to be part of such a renowned organization," says Serena. "Having spent so much of my childhood in the area, being involved with a staple of Miami culture is a huge honor. We look forward to many championships and much success together with the Miami Dolphins."

Agrees Venus, "I am honored to be a partner in the Miami Dolphins franchise and thankful to owner Stephen Ross for allowing Serena and I to be part of Miami Dolphins history."

Looks like the Williams sisters will definitely be ready for some football when the NFL season kicks off next week.

Crossposted from Feministe
Posted by Monica Roberts at 2:00 PM