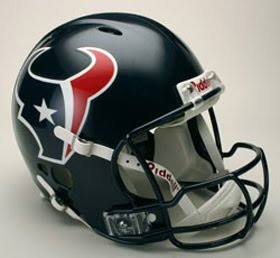 You know how much we jilted Oilers fans hate the Tennessee Traitors (oops, Titans) for skulking out of H-town. When we got the Texans and were placed in the AFC South, the Traitors became our number one rival for obvious reasons.

We get to see them twice a year and get our hate on.

So I was deliriously happy to see my Texans not only won their first game of the young NFL season earlier today, but beat the Tennessee Traitors 34-31 in Nashville to do it. The Texans also got into a fourth quarter sideline scrap with the Traitors as well.

It didn't look good early as the Traitors jumped out to a 21-7 lead thanks to Chris Johnson's career day rushing for 197 yards and two TD's. He also caught nine passes for 87 yards and another touchdown. 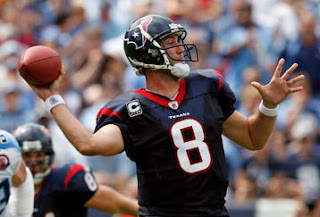 The Texans took that early punch, fought back and scored 17 straight points tom forge a brief 24-21 lead thanks to Matt Schaub's passing arm. He finished the day with four touchdowns, 357 yards and zero interceptions. 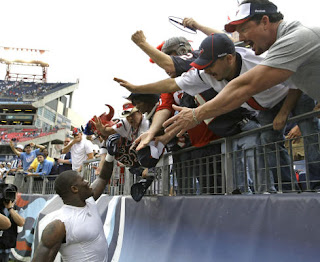 The game was a tight, roller coaster affair until Kris Brown's 23 yard field goal put the Texans up 34-31, the Traitors last gasp drive ended when Kerry Collins fumbled and the Texans recovered it to preserve the hard fought victory.

It not only evened the Texans record at 1-1, it was only the second time in the team's history that they'd beaten the Traitors in Nashville.

Since it's the 50th anniversary year of the AFL's founding, the Traitors will have to wear replica Oilers uniforms when they match up against original AFL teams.

See you boys in November.
Posted by Monica Roberts at 10:06 PM