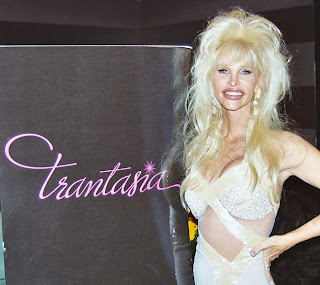 Today would have been my fellow Texan Jahna Steele's 51st birthday.

The San Antonio born Jahna was part of the Crazy Girls Revue at the Riviera in Las Vegas starting in the late 1980s. She was voted Las Vegas' Sexiest Showgirl in 1991 and things were going well for her until she was outed by the tabloid TV show A Current Affair a year later.

She resurfaced in 2004 after moving to Hawaii and making early 90's guest appearances on several talk shows, an episode of NYPD Blue and nightclub singing stints.

She was the hostess of The World's Most Beautiful Transsexual Contest' that was documented in the film Trantasia.

Jahna was working on an autobiography and reviving her singing career when she tragically died of an accidental drug overdose in Las Vegas on January 24, 2008.

She had a colorful life and won't be soon forgotten.

Rest in peace, sis.
Posted by Monica Roberts at 3:00 AM