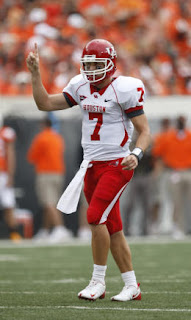 Thanks to their 45-35 victory over the then number 5 ranked Oklahoma State Cowboys, my alma mater's football team is ranked in the AP Top 25 for the first time since since September 17, 1991.

That was during the run and shoot era of Cougar football. Our quarterback was David Klingler and we were ranked number 10 in the nation at the time with a huge nationally televised game against the Miami Hurricanes coming up.

We got blown out 40-10 in the Orange Bowl, tumbled to number 21 in the rankings, then got beat down the next week by Illinois 51-10 to fall out of the Top 25 and start what turned out to be an 18 year trip in football hell.

Through it all we were snubbed by the Big 12 (with much help from Texas), and suffered through some lousy Saturdays and an 0-11 season just eight years ago. There were agonizing losses and even calls from some people (probably Wronghorn fans) for the school to drop football or downgrade it to Division 1-AA.

But the Coogs are back on the prowl, starting the season 2-0, the first C-USA team to be ranked this year and we Cougar fans are deliriously happy about it. 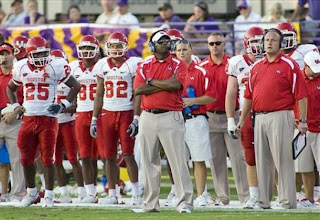 I agree with the fans and alums calling for the university to give coach Sumlin a long term extension on his contract. We have the coach, let's do what it takes to keep him there hopefully as long as Bill Yeoman stayed.

We still have much football left to be played in this young 2009 season so I'm trying not to get overly enthused about how its started so far.

We're back in the AP football rankings, but as I'm painfully aware of, the hard part will be staying there.
Posted by Monica Roberts at 1:00 PM