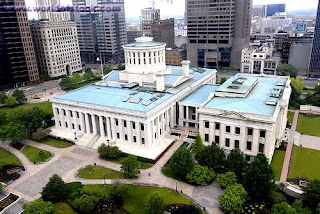 History was made in Columbus, OH yesterday as HB 176, the Equal Housing and Employment Act passed the Democratically controlled House by a 56-38 vote.

All the Democratic members of the Ohio House of Representatives voted for the bill except one. Rep. Lorraine Fende didn't cast a vote. It also garnered yes votes from five Republican representatives.

The EHEA would prohibit discrimination based on sexual orientation or gender identity in employment, housing and public accommodations in Ohio, and its passage in the House marks the first time a pro-LGBT bill passed either chamber of the Ohio Statehouse.

The Ohio Democratic Party sent out this press release after the passage of the EHEA.

COLUMBUS – Today, the Ohio Democratic Party praised the passage of H.B. 176, the Equal Housing and Employment Act, a bill to prohibit discrimination in housing and employment based on sexual orientation and gender identity. All House Democrats supported the bill. It is the first bill that was passed in the Statehouse when legislators returned to session today and the first bill in our state’s history that would expand rights for lesbian, gay, bisexual and transgender Ohioans.

“With today’s historic vote, we are one step closer to ensuring that Ohioans will not be fired or kicked out of their homes just because of who they are or who they love,” said Ohio Democratic Party Chairman Chris Redfern.

“The fact that all House Democrats supported H.B. 176 is a testament to our Party’s commitment to equality for all Ohioans. I congratulate Equality Ohio and their coalition partners, the Human Rights Campaign and Stonewall Democrats, as well as Representative Dan Stewart, House Leadership and all who worked so diligently to make passage of this bill possible. We urge Senate President Bill Harris to move it through committee and to a vote on the Senate floor.”

Unfortunately the Ohio Senate is GOP controlled, so it is highly unlikely the EHEA is going to pass there.

But the gang at Equality Ohio, LGBT Democrats, supporters and Senate Democrats led by Sen. Dale Miller, D-Cleveland will give it the old college try.

Lynne Bowman, the executive Director of Equality Ohio, stated in a Columbus Examiner interview aid she is gearing up for a push in the Senate, which will include convincing Republicans that this is not a politically risky vote. However, she also realizes that, because a number of Senate Republicans are in safe seats where the only true challenge could come in a GOP primary, the bill may not see action until after the 2010 May primary.

"We've had preliminary conversations over the last few years, so we know where we need to do our work and where our opportunities are," Bowman said of the Senate.

Good luck and congratulations on getting it one step closer to becoming law in the state of Ohio.

H/T Law Dork
Posted by Monica Roberts at 9:30 AM