Williams Sisters March To US Open Fourth Round 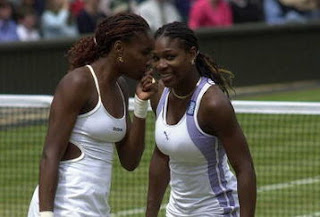 Serena and Venus Williams continue to kick butt and take names enroute to a potential semifinals matchup at the 2009 US Open.

Big Sis knocked off Magdalena Rybarikov 6-2, 7-5 to advance to her fourth round matchup with 2005 US Open champ Kim Clijsters. Clijsters is back on the tour after a two year maternity leave and looks like she's ready to pick up where she left off. She will provide a formidable test for Big Sis, who is still battling that sore knee.

Little Sis beat Spaniard Maria Jose Martinez Sanchez 6-3, 7-5 to advance to the fourth round. If the name sounds familiar to you, it's because they were involved in some serious drama the last time they met at the French Open.

During the third round of The French Open, Sanchez's serve and volley game pushed Little Sis to three sets before she prevailed. She was also incensed about a first set no call in which a ball Serena struck hit Sanchez on the arm and cleared the net.

During the post match press conference Little Sis called her opponent a 'cheat' because she didn't say anything when she clearly hit a shot over the net with her arm, in violation of the rules.

Ah, revenge is a dish best served cold.
Posted by Monica Roberts at 2:01 AM