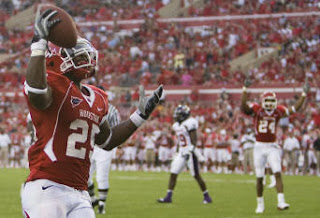 Had to give my fave college football team a shoutout as they opened up their 2009 season last night with a 55-7 beatdown of Northwestern State.

Quarterback Case Keenum was 23-30 for 359 years as my Coogs won their season opener for the second straight year under coach Kevin Sumlin.

The competition gets a little stiffer as the Cougars head to Stillwater, OK and a September 12 date with the Top 5 ranked Oklahoma State Cowboys.

They just missed making it to the C-USA-title game for the second time in three seasons, but i was happy he finally broke that bowl game jinx.

Best of luck Coogs for a successful season.
Posted by Monica Roberts at 8:01 PM