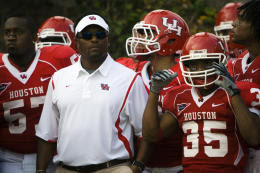 The Cougars are now ranked at Number 17 in advance of Saturday's sold out game at The Rob with Texas Tech. The Coogs also cracked the USA Today Coaches Poll for the first time this season at Number 23.

This is the first time we've played Texas Tech since the breakup of the SWC 14 years ago. Yeah, I'm still bitter about UH getting frozen out of the Big 12 it along with every UH fan and alumnus because UT was tired of us kicking their behinds on the regular.

It's going to be a tough game against another Big 12 opponent, especially in light of Texas Tech's 34-24 loss to the Number 2 Wronghorns in Austin yesterday. But back to my alma mater's football team. If they knock off the Red Raiders on national TV (ESPN 2) and in front of a sold out Robertson Stadium, it will set them up for a potentially very special season.

And more importantly, it will potentially set UH up for success in the best place in the Lone Star State for recruiting high school football talent.

Trying not to get ahead of myself and not even say 'BCS Buster'. But if they keep winning and taking it one game, one quarter and one play at a time, it could happen.