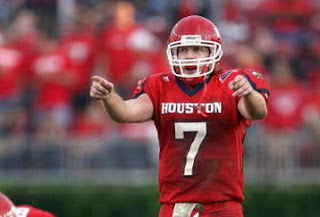 I'm so proud of my AP Number 21 ranked UH Cougars. They are taking a well deserved weekend off before they tangle with another tough Big 12 school in Texas Tech.

Do the Coogs have the potential to be this year's BCS buster?

Maybe. But to do that they have to channel Oakland Raiders owner Al Davis' mantra of 'just win, baby.

So now that I've given a shout out to my fave collegiate football team, time to sort through the cavalcade of foolish losers and decide who gets our coveted prize this week.

As usual, we have a plethora of fools to choose from. Hannity and Limbaugh ever fail to disappoint. There were others such as Michele Bachmann (R-MN), Rep. Virginia Foxx (R-NC), and Michelle Malkin.

But this week's fool is Glenn Beck

Glenn Beck, shut the hell up fool!
Posted by Monica Roberts at 11:01 PM