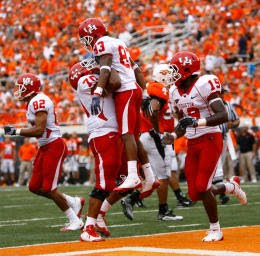 I spent a very enjoyable afternoon watching my alma mater not only beat a Big 12 school to move to 2-0 in this young 2009 college football season, but win their first game against a top ranked opponent in 25 years.

We beat Oklahoma State 45-35 in Stillwater, OK for UH's first win against a Top 5 football program since we knocked off the hated Number 3 ranked Longhorns 29-15 in Austin on November 11, 1984.

When I was a UH student, we were a top 5 ranked program under coach Bill Yeoman. His Veer offense gobbled up yards at a prodigious rate along with wins and championships in the old Southwest Conference. 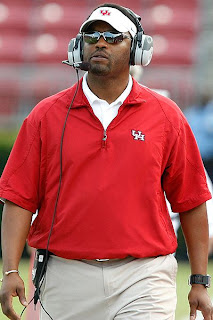 My school has fallen on hard football times since then, but may be finally turning it around under our second year coach Kevin Sumlin.

Sumlin is one of the few African-American collegiate head football coaches in what used to be known as Division 1. UH has won three consecutive encounters against ranked opponents since he arrived on campus.

The last time UH put together that long a winning streak against ranked opponents was in 1978.

Last year we won our first bowl game since 1980. This was a marquee win against a Big 12 school, a conference we feel as Cougar fans we should have been a part of from its formation. 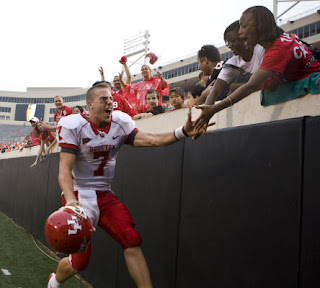 "For us as a program, this is a big win," UH coach Kevin Sumlin said. "It legitimizes our university and legitimizes our program. There's no doubt that one win does not make a season. But any time you can go on the road and beat a top-10 team, it really helps your confidence as a program and your pride as a university. That's more important to me than what's happened in the last 100 years."

This was a huge win, and after this bye week the competition gets even tougher as we play another Big 12 school, the Texas Tech Red Raiders September 29 at Robertson Stadium.

Congratulations Coogs, you've got this alum standing a little bit taller tonight, and I'm not using my heels to do it.
Posted by Monica Roberts at 6:15 PM