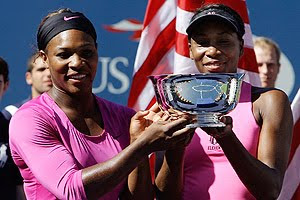 Serena shook off Saturday's semifinal drama, the $10,000 fine it cost her and joined her sister Venus in winning their first US Open doubles title in a decade.

"I'd like to thank the fans for supporting me through everything," she said to applause from a few thousand fans at Arthur Ashe Stadium. "I really, really love you guys and never want to have a bad image for you guys."

The Williams sisters made quick work of the world's number one ranked and tournament number one seeded doubles team in Liezel Huber and Cara Black. 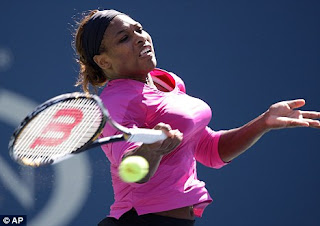 The only Grand Slam doubles title that eluded them was the French Open.

"I have a great partner," Venus said. "I believe in her just as much as I believe in myself."

Patrick McEnroe, whose brother John was notorious for tennis meltdowns during the 80's tried to press the issue during the post match interview.

The crowd started booing until Big Sis stepped in.

"I think what the crowd is saying is, 'Patrick, let's move on,'" Venus said

Yep, let's move on to 2010 and see if the sisters can catch the team of Natasha Zvereva and Gigi Fernandez, who captured 14 Grand Slam doubles titles and eventually Navratilova and Shriver.
Posted by Monica Roberts at 3:00 PM