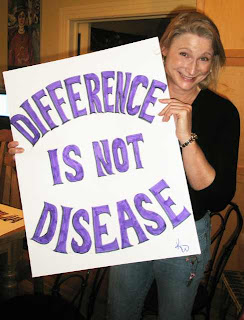 TransGriot Note: One issue that many trans people are passionate about is GID reform.

I'm proud to know and was able to get reacquainted with on my trip to Boulder last fall with Dr. Kelley Winters, who is one of the activists leading the fight to open minds on that issue.

Here for your TransGriot reading pleasure is the text of a June 22, 2009 letter she penned to help make the case.
****


Dear Drs. Schatzberg and Bernstein:
I am a writer and consultant on gender diversity issues in medical and mental health policy, and I am asking the American Psychiatric Association to affirm human dignity and access to medical transition treatment for trans and gender variant individuals in public position statements.

To introduce myself, I am the author of Gender Madness in American Psychiatry: Essays from the Struggle for Dignity (2008) and the founder of GID Reform Advocates (www.gidreform.org). I serve on advisory boards to the Matthew Shepard Foundation and TransYouth Family Allies, and I have presented papers to Annual Meetings of the American Psychiatric Association in 1998, 2003 and 2009.

I am also a transsexual woman and can speak personally to the barriers to dignity, civil justice and medical care at issue in current APA policies and diagnostic nomenclature.

The APA has a long taken strong public positions in support of oppressed minority groups. For example, in 1973 the American Psychiatric Association issued a historic position statement on “Homosexuality and Civil Rights” that had a profound impact on public opinion and defamatory stereotypes. Unfortunately, the APA has never issued a similar statement in support of trans and gender variant people, even though APA policies and DSM nomenclature have contributed to analogous barriers and stereotypes that trans and gender variant people face.

I am asking for your personal support in drafting APA position statements to clarify that gender difference is not disorder, to affirm the medical necessity of transition care, and to urge legal recognition of social gender transition:

• I ask the elected leadership and Board of Trustees of the American Psychiatric Association to affirm in a position statement that gender identity and expression which differ from assigned birth sex do not, in themselves, constitute mental disorder and imply no impairment in judgment or competence.

• I also ask the APA to follow the example of the American Medical Association, the American Psychological Association, and the World Professional Association for Transgender Health (WPATH) by issuing a statement clarifying the medical necessity of hormonal and/or surgical transition treatments for those who suffer distress caused by deprivation of physical characteristics congruent with their gender identity. I call on the APA to urge insurance and healthcare coverage for medically prescribed transition treatment as well as ongoing and ordinary medical and mental health care.

• Finally, I ask the American Psychiatric Association to follow the example of the American Psychological Association and WPATH in opposing discrimination on the basis of gender identity or expression and encouraging legal recognition of all people that is consistent with their gender identity and expression. I ask the APA to affirm in a position statement the dignity and legitimacy of individuals who have transitioned their social gender roles, regardless of their physical anatomy or assigned birth sex.

I have attached the names of well over 400 community members, leaders, clinicians, researchers, scholars and allies, who have joined me in this request through an on-line Facebook advocacy group. I have also attached copies of individual letters that I have received.

I would very much appreciate your consideration and endorsement of these position statements. Please feel free to contact me, if I can answer any questions that you have or can provide more information.