The FLOTUS Is Handling Her Olympic Business 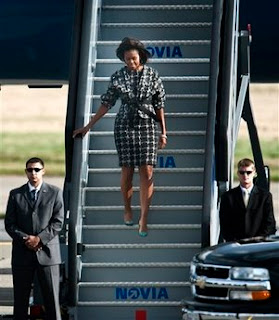 The First Lady has arrived in Copenhagen in advance of the 121st International Olympic Committee Session that will determine on Friday whether her hometown hosts the 2016 Summer Olympics.

“I’m so happy to be here, so excited,” the First Lady said. “We’ve got a lot of work to do. We’re not taking anything for granted, so I’m going to go talk to some voters.”

She will lead the US delegation in Copenhagen until President Barack Obama arrives on Friday in time for the final presentations before the IOC vote.

But until he does, she and the Chicago 2016 team will be handling our Olympic business.

On Thursday, the First Lady will meet with IOC President Jacques Rogge and attend a luncheon hosted by Queen Margrethe II of Denmark at the Amalienborg Palace.

She'll be attending the IOC Session Opening Ceremony at the Copenhagen Opera House that night.

The First Lady and the President will both make presentations before the IOC on Friday morning. According to the White House, "They will discuss why Chicago is best to host the 2016 Summer Games, and how the United States is eager to bring the world together to celebrate the ideals of the Olympic movement." 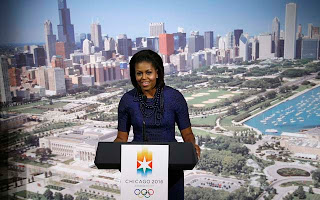 Being a Chicago native, The FLOTUS is definitely the right person to sell the world in bringing the 2016 Games to Chicago. She knows the neighborhoods where the Games venues would be placed, she grew up on the Chicago's South Side and lived just a short walk from the planned Olympic stadium before moving to Washington.

And she's one of the few people on the world stage whose popularity rivals her husband.