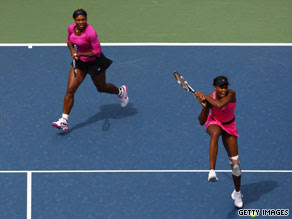 For the first time in a decade, my favorite tennis playing siblings are in the US Open doubles finals.

Whoever their opponent is will have to bear in mind the fact that the Williams sisters record in Grand Slam Doubles finals is a sparkling 9-0. 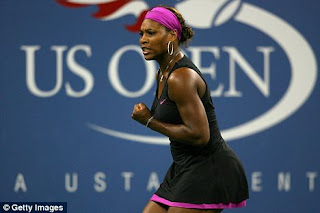 "Hopefully, that's a record that won't end yet," Serena said. "We really want this. I'm sure whoever we play really wants it, too."

Speaking of finals, assuming the weather is clear, Little Sis will take on Kim Clijsters at 8 PM EDT in a semifinal matchup for a spot in the finals.

Little Sis seeks to continue her march to repeat as the US Open women's singles champ and win her 12th Grand Slam singles title.

Here's hoping that this ends up as a very good weekend at Flushing Meadows for the Williams siblings.
Posted by Monica Roberts at 10:30 AM