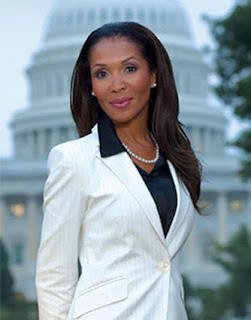 Throughout our tortured history here in North America, we have had people who will sell out the entire community for their own personal gain and comfort.

This new TransGriot feature will enlighten and expose you to these people and why we loathe them in the reality based African-American community so much.

She a former beauty queen (Miss District of Columbia USA 2004) and lobbyist who appears on Faux News, and wrote a waste of trees called 'Bamboozled.'

I would submit that the only person that's been bamboozled is Angela.

Logic and reality challenged Black conservatives can dish out the criticism, but they can't take it. She's still running from a now two year old debate challenge from the Field Negro, who called her on her crap.

But back to our Saturday Sellout.

When it's a Black woman or Black people in general that need to be attacked by the conservafools, or Faux news wants to look more 'diverse', Angela is their go to chick.

Here's a sample of Angela's handiwork.

She not only made the NEWS One Top Five Fox News Uncle Toms list, she worked for now embattled senator John Ensign (R-NV).

She defended comedian Jackie Mason for uttering the 'schvartzer' slur during a comedy routine, compared the FLOTUS to a gangsta rapper, tried to back the ludicrous claims that the hate on Obama Rally had 400,000 people in attendance and sided with Don Imus when he dissed the Rutgers women's B-ball team. 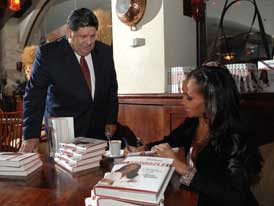 Angela definitely deserves an Oreo cookie when it comes to kissing up to the 'white' wing. She's also a living example of Zora Neale Hurston's commentary that 'all my skinfolk ain't my kinfolk'.

Her lips are always moving when it comes to alleged liberal misdeeds, but when confronted with the numerous instances of conservative racism and misconduct and the racism of her Fox paymasters those lips suddenly go mute.

Um, can we call the Drop Squad and have her go in for an extended session ASAP?
Posted by Monica Roberts at 11:00 PM

Not that I'm equating her with a wingnut like Angela McGlowan, but Zora Neale Hurston made some pretty crazy rightwing statements herself!