Big Sis Taken To Limit In 2009 US Open Match

The 2009 US Open started yesterday in Flushing Meadows, NY and will be running until September 13.

You know I'll be watching as my favorite tennis playing siblings battle the women's tennis world and their haters to capture another major tennis title.

While number 2 seed and defending US Open champ Little Sis opened play by cruising to a straight set 6-4, 6-1 win over Alexa Glatch, Number 3 seeded Big Sis had a rougher time. 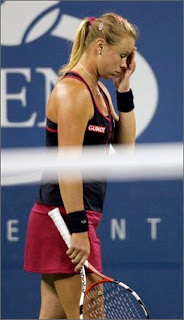 In their careers, neither Venus or Serena has ever lost in the opening round of a Grand Slam tournament. But Dushevina came extremely close to knocking out Big Sis.

Venus dropped the first set in a 7-5 tiebreaker. She led 5-3 in that tiebreaker until being rattled by a foot fault call that wiped out a great serve that would have given her a 6-3 lead. She also called an 8 minute injury timeout early in the first set at 2-1 to deal with her left knee in addition to struggling with her second serve.

She found herself down 5-4 in the second set just serving to stay in the match and fell behind love-15. The number 47 world ranked Dushevina found herself just three tantalizing points away from pulling off a major upset. 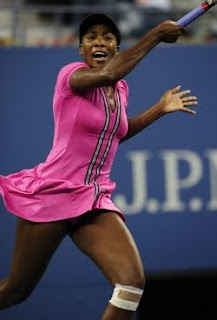 But as Houston Rockets coach Rudy Tomjanovich once said, "Never underestimate the heart of a champion." Big Sis dug deep and won the next seven games to even the match and take control of the match by building a 4-0 third set lead enroute to winning the match.

If the Williams sisters continue their winning ways, they would unfortunately meet in the semifinals of this tournament. They are on the same side of the 2009 US Open women's singles draw.

The Williams sisters last won the US Open women's doubles championship in 1999, and are seeded fourth in this tournament.

Hopefully Big Sis gets the kinks out of her service game while playing some doubles. She had ten foot faults in that match, and there are concerns about whether her left knee will hold up from the pounding its going to take from the hard court surfaces at the Billie Jean King Tennis Center.

Stay tuned to find out if Little Sis makes it back to back US Open singles titles, if Big Sis finally wins a major and they capture their first US Open women's doubles championship in a decade.
Posted by Monica Roberts at 2:00 PM