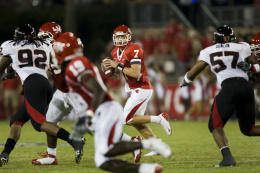 I said Texas Tech was going to be a big test for the Number 17 ranked Coogs, and they passed it with flying colors.

Tech fell to the Coogs 29-28 and the beautiful part was that we knocked off another Big 12 school. It they keep winning, I won't be able to go to Memphis to see the Coogs, it will be a BCS bowl game.

With a crowd of 32,113 looking on that included my classmates and Phi Slama Jama heroes Hakeem Olajuwon and Clyde Drexler as honorary game captains, the 3-0 Coogs showed a national television audience that we are for real.

Tech gave us everything we wanted and then some. UH trailed Tech 21-10 at the half but kept chipping away at the Red Raiders. 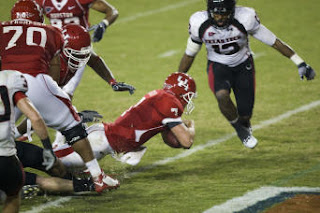 After the defense came up big on a critical fourth and goal stop with 5:43 left in the game and Tech leading 28-23, Case Keenum led the Coogs on a drive that will live in Cougar fans hearts forever.

The 16 play, 95-yard game winning drive featured Keenum scrambling for a first down on a third-and-10 play and finding Patrick Edwards for 7 of his 443 passing yards on a critical fourth-and-3 play to keep the drive alive. 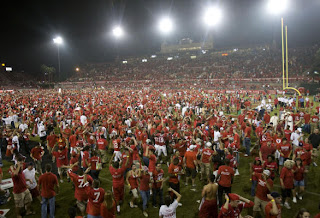 Keenum scored on a quarterback draw with 49 seconds left. A Hail Mary for Tech wasn't answered and the celebration was on at the Rob as the Cougars beat Texas Tech for the first time since 1990.

To all you haters who keep dissing the Cougars by sneering we play in a 'dinky little conference', not our fault UH was dissed and kept out of the Big 12.

But Big 12 schools are going to pay for that snub. Eat em up!
Posted by Monica Roberts at 1:20 AM