President Obama and Oprah Winfrey Are Headed To Copenhagen

The International Olympic Committee meeting to determine who gets the 2016 Summer Olympics will be held on Friday and the Chicago 2016 delegation is hard at work trying to land the bid.

According to Olympic bid watchers it has devolved to a competition between Rio de Janeiro and Chicago, and it's anybody's guess which way the 106 members of the IOC will vote. The only thing anyone can say with certainty is that it will take multiple ballots and it will be close.

With rumors flying a high IOC official stated Chicago won't get the bid unless the prez appears in Copenhagen despite comments from IOC President Jacques Rogge to the contrary, President Obama decided to make the trip. 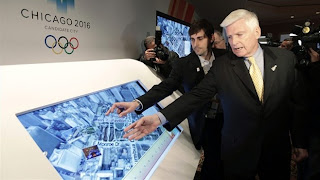 Chicago 2016 Chair Patrick Ryan stated, "There is no greater expression of the support our bid enjoys, from the highest levels of government and throughout our country, than to have President Obama join us in Copenhagen for the pinnacle moment in our bid. We are honored that President Obama and First Lady Michelle Obama will be with us to extend a hand of friendship on behalf of our nation and the city of Chicago as we seek to welcome the world for the 2016 Olympic and Paralympic Games".

Chicago Mayor Richard M. Daley said, "President Obama and First Lady Michelle Obama symbolize the hope, opportunity and inspiration that makes Chicago great, and we are honored to have two of our city's most accomplished residents leading our delegation in Copenhagen. Who better to share with members of the International Olympic Committee the commitment and enthusiasm Chicago has for the Olympic and Paralympic Movement than the President and First Lady".

Oprah Winfrey has also announced she would be heading to Copenhagen as well to help push the Chicago Olympic bid, and the leadership is happy to have her along as well.

Valerie Jarrett, who was the vice chair of Chicago 2016 prior to becoming a senior adviser in the Obama administration stated, "Oprah will have a full schedule from the time she hits the ground as well. I think that she is an international icon, widely respected throughout the world and her presence, and her willingness to put her reputation behind Chicago, a city she both calls home and loves and knows so well, I think will have a very significant impact on the IOC."

We'll find out how much of an impact they all had on the IOC on Friday
Posted by Monica Roberts at 9:00 AM