Pouring Tea At U of L

I only stayed home long enough to change clothes, write a post and check my e-mail as I returned to the U of L campus for a 7 PM Pride Week event.

This time I wasn't leading the discussion. I got the pleasure of being a spectator after running my mouth with Dr. Kaila Story, Jaison Gardiner (or as I call him 'Nephew' since he calls me 'Auntie Monica') the gang in Blkout, the new African American GLBT organization on the U of L campus, and other assorted peeps on campus and in the Louisville GLBT and progressive community.

What I bounced out of the house for was to witness Dr. E. Patrick Johnson's one man play entitled 'Pouring Tea: Black Gay Men of the South Tell Their Tales' 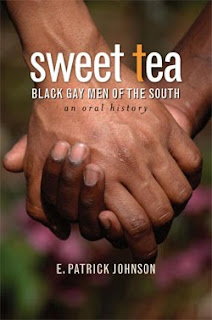 The play grew out of the oral histories that Dr. Johnson compiled while writing his just released book published by the University of North Carolina Press.

The book is entitled Sweet Tea: An Oral History of Black Gay Men of the South.

It covered topics such as coming of age in the South, religion, sex, transgenderism, love stories to coming out. The oral histories are from black gay men and a transwoman who were born, raised, and continue to live in the South ranging in age from 19 to 93.

It was a fascinating and enjoyable two hours listening to Dr. Johnson channel the various people depicted in this play. One of the people was an old friend of mine I met at the 2004 Southern Comfort Conference.

Some of the stories hit close to home, especially when Dr. Johnson got to the section of the play about Chastity, the trans character. I was also fascinated to hear 93 year old Countess Vivian tell his stories about Black gay life in segregated New Orleans.

I had the pleasure of talking to Dr. Johnson when it was over. He is on a fall tour on various college campuses with this play as I write this.

If it appears on your campus or a campus near you, go see it. You'll be glad you did.
Posted by Monica Roberts at 11:06 PM